Skip to content
Previous Next
Report: Smart tech revolution the key to cutting queues and delivering a better experience at our international airports

Report: Smart tech revolution the key to cutting queues and delivering a better experience at our international airports

A new report released today by the Tourism and Transport Forum Australia (TTF) urges the Federal Government to roll out world-leading border management technology to slash growing queues in our international airports and greatly improve the border experience for millions of Australians and international visitors travelling every year.

The report, “Welcome to Australia! Improving the International Experience at the Border”, produced for TTF by the specialist aviation consultancy Airbiz, identifies solutions to remove bottlenecks in international terminals, which create major delays for arriving and departing travellers, tainting the reputation of ‘Brand Australia’ immediately before or straight after a visit.

“We sell Australia as one of the world’s most memorable destinations, but increasingly we welcome and farewell our visitors with some of the most forgettable border experiences,” said TTF CEO Margy Osmond.

“Airport operators are working overtime to improve airports with refreshed and updated retail, dining and business facilities but we need Government to do its part by improving the border facilitation services for which it is responsible.

“If we are to meet our goal of being one of the world’s leading visitor destinations, we need to ensure that every part of the visitor experience, including the critical first and last impressions, is equal to or better than our global competitors.

“The fact that three in five people (60 per cent) stepping off an aeroplane in our international terminals are return visitors to Australia, it is vital to our visitor economy that we provide the best experience possible to keep them coming back again and again.

“Our report identifies the problems, highlights international best practice, and suggests common-sense solutions, using a combination of exciting technology and new practices to put Australia on the right path to consistently providing a first-class visitor experience at our international gateways.”

Key recommendations of the report include:

“In a global survey conducted by the International Air Transport Association, airline passengers identified queueing at airports as one of the greatest frustrations of international air travel. It’s the experience at airports that we all dread but the technology already exists to transform the entire process,” Ms Osmond said.

“Our report highlights a range of innovations which streamline border processing in markets including Singapore, UK, US, Canada and the UAE. Another destination, the Caribbean tourist island of Aruba, uses biometric facial recognition technology to enable 100 per cent ‘self-serve processing’ for departing passengers, eliminating outbound queueing.”

Ms Osmond said revenue already generated by the Federal Government’s $1 billion holiday tax – the Passenger Movement Charge – as well as potential earnings from the proposed premium processing service and efficiencies from other measures, could go towards the technology improvements recommended in the report.

In a recent submission to the Senate Inquiry into the Working Holiday Maker Reform Package, TTF said Government expenditure on border management and passenger facilitation would cost approximately $237 million in 2016-2017 – but the Passenger Movement Charge would recover an estimated $985 million – a profit of $748 million to the Government at the expense of travellers.

“The money is certainly already there to create more efficient borders, and much better passenger experiences. It’s time for the Federal Government to jump on board and work with industry to make the Australian border experience one of the best in the world,” Ms Osmond said. 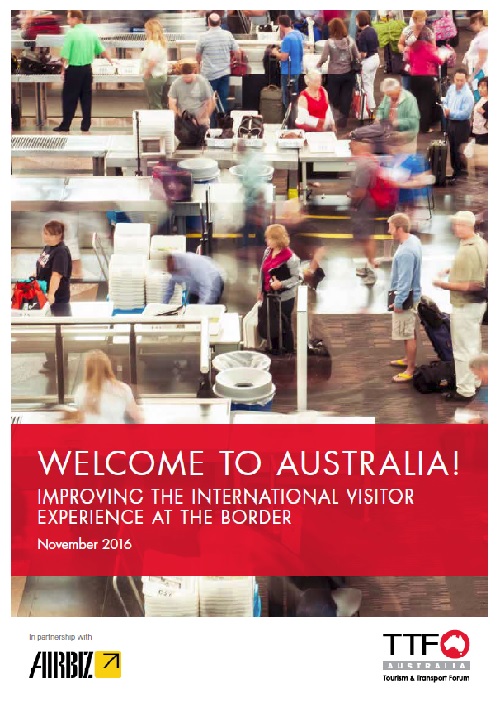