Skip to content
Previous Next
The ABC of the PMC: Tourism industry launches infographic spelling out why holiday tax hike is bad news for visitor economy

The ABC of the PMC: Tourism industry launches infographic spelling out why holiday tax hike is bad news for visitor economy

The Tourism & Transport Forum Australia (TTF) has today released an infographic highlighting the potential damage to the visitor economy of increasing the Federal Government’s holiday tax – the Passenger Movement Change (PMC) – to $60 from 1 July 2017. 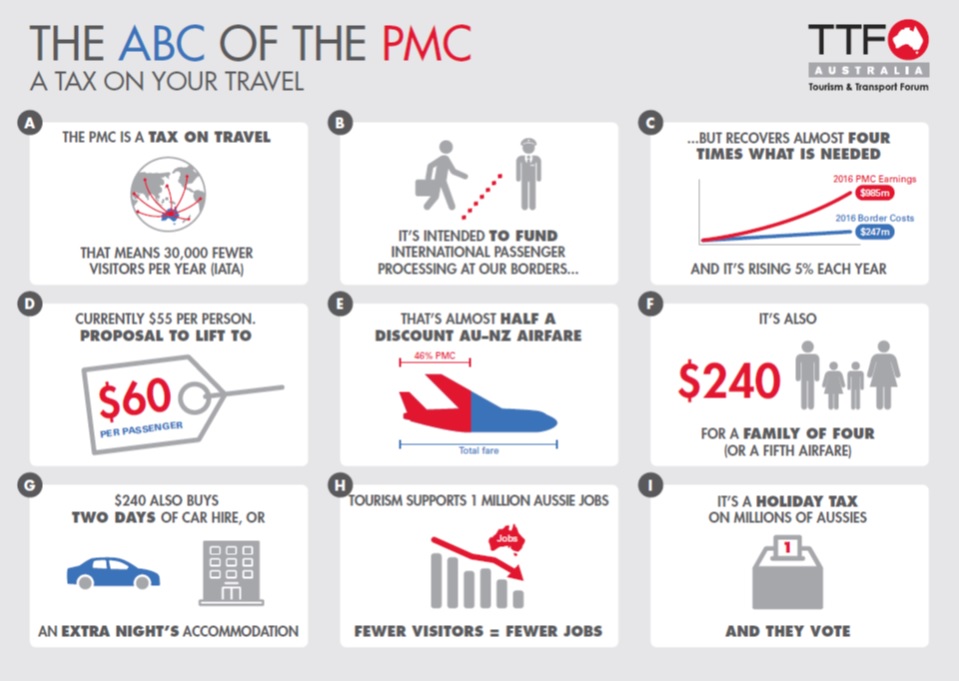 “TTF has called on the Federal Parliament to reject the proposed increase to the holiday tax – the Passenger Movement Charge – and our infographic spells out quite clearly that increasing travel taxes has a negative impact on our visitor economy,” said Margy Osmond, TTF CEO.

“The reality is that the Federal Government’s holiday tax is already raising $1 billion a year and it’s growing at about 5 per cent each year – there is absolutely no justification for the Government to put its hand further in the pockets of travellers.

“The holiday tax was originally introduced to pay for providing border services at airports and cruise terminals but it is now raising four times the $250 million cost of providing customs and border security – that is a windfall profit straight into the Government’s coffers.

“Increasing the holiday tax to $60 per person (over 12yrs) from 1 July 2017 is a $240 tax on a family of four. That is the equivalent of a Trans-Tasman airfare, a couple of days car hire or another night’s accommodation – spending that can support jobs and economic activity in Australia’s visitor economy.

“Shockingly applying a $60 holiday tax is now nearly half of a discount Australian-New Zealand airfare – that is a significant disincentive for travel between our two countries and that is costing us thousands of potential jobs.

“The Federal Government has flagged the holiday tax hike as part of its working holiday maker reforms that are being debated in the Senate this week. It was announced with no consultation with industry about the potential impact it will have on the visitor economy.

“What we need to see from Parliament in this last sitting period for the year is a solution to the backpacker tax that delivers a competitive tax rate significantly less than the 32.5 per cent that will smash working holiday makers if left unchanged.