Skip to content
Previous Next
Ticket to Ride: Commuters will need to contribute more to help fund better public transport in our cities says new report

Cost-recovery for public transport has reached unsustainable levels and must be overhauled to support sustainable transport services in Australia’s capital cities according to a new report released by the Tourism & Transport Forum Australia (TTF).

The PwC report, “Ticket to Ride: Reforming fares and ticketing for sustainable public transport”, was commissioned by TTF and analyses the current policy settings for fares and ticketing in Australia’s capital cities in comparison to worldwide benchmarks.

The report finds that the goals of fare policies are disjointed and unclear, and that fare levels across Australia’s major public transport networks are financially unsustainable to fund existing networks, let alone the billions of dollars’ worth of new transport projects planned in our capital cities.

Few international jurisdictions operate public transport at 100 per cent farebox cost recovery (or at a profit) but most raise much higher farebox revenue (as a percentage of operating costs) than Australian jurisdictions – Perth (30 per cent), Brisbane (23 per cent), and Sydney/Melbourne (22 per cent) – compared to Wellington (57 per cent), Dunedin (54 per cent), and Chicago (55 per cent) which have similar popular density to Australian cities.

The report provides five key recommendations to Government to improve the sustainability of public transport funding:

“The harsh reality is that good public transport costs money and commuters are going to have to dig a little deeper if they want more trains, buses, trams and ferries in our capital cities,” said Margy Osmond, TTF CEO.

“Cost-recovery in Sydney, Melbourne and Brisbane is around 22 to 23 per cent. You can’t run an effective public transport system when three-quarters of your funds are coming from somewhere else and the international benchmark is moving towards 50 per cent recovery.

“Fares and ticketing has always been a politically-charged issue. It’s time for a concerted effort from political leaders to take the politics out of fare pricing of public transport.

“We have seen where public transport fares have been given to independent pricing authorities to oversee but the final decision on fares rests with the Government of the day. That inevitably ends up with fares policy being viewed through an election lens rather than what is necessarily in the best financial interests of the sustainably of the network.

“The way forward is for Government to determine with community consultation what the policy goals of fare pricing are and then to hand the process over to an independent authority that has the final word on pricing.

“The case in London is a good example of what can be applied to Australia. The London policy sets out transparently what the fare increase will be, what component of the fare rise is inflationary, how much is funding additional services and new infrastructure and what that program will deliver.

“A TTF survey of Australian attitudes to public transport shows an open-mind towards the need to fund better public transport through realistic fare policies. When asked if they are willing to pay more for better transport services, 39 per cent said were supportive, 31 per cent were opposed and 30 per cent were unsure. With almost one in three people unsure, that provides transport operators with an opportunity to make their case by articulating a coherent and transparent fare policy.”

Ms Osmond said that any fare policy reforms should be applied across the board and include any private operators who have been left out of the roll-out of electronic ticketing systems.

“We know in Sydney that some ferry operators have been left out of the roll-out of the Opal card, and that places them in a less competitive position when they need to have their own fares and ticketing systems. A clear recommendation of our report is for Government to make ticketing systems available across the entire spectrum of transport providers.” 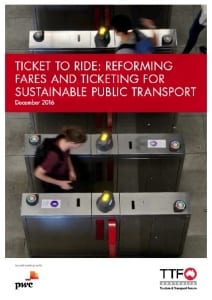